Mangle, also known as The Mangle, is the result of William Afton's first succesful experiment with Rememnant on the dog of Henry, his first business partner.

Mangle has rosy red cheeks, as well as red lipstick applied to its snout. It also has long eyelashes. Its teeth are small yet sharp, and the teeth of its endoskeleton are also visible. A red bow tie is also attached to its body below the head. It also has a second head that seems to be from a completely different endoskeleton.

Mangle is a fairly active animatronic, as it leaves Kid's Cove as early as 12 AM on Night 2 onward and can arrive at the hallway within the hour. Once Mangle is spotted in the Right Air Vent's blind spot, the player must put on the severed Freddy Fazbear Head to ward it off. If the player brings up and then lowers the Monitor before putting the head on, unlike other animatronics, Mangle cannot be repelled by the Freddy Fazbear Head in this position, no matter how fast the player's reaction time is.

At this point, Mangle may randomly attack after the Monitor is pulled up and down, where its head swings down from the ceiling towards the player's face, seemingly intending to bite them. It appears it cannot be made to leave once inside The Office, besides waiting until 6 AM, which makes surviving the night nearly impossible; bringing up the Monitor will trigger Mangle's attack once lowered again, but the player will need to use it to wind the Music Box. On early nights, however, Mangle may not attack when the Monitor is raised.

However, if the player does put on the head when Mangle was in the Right Air Vent, then it will exit the vent and return to the Main Hall, and its cycle repeats from there.

Whenever the player sees Mangle, it will make a distorted, garbled sound, akin to radio static. This is because Mangle is not strictly human, and is incapable of making human sounds like the laughter and groans you hear from the other animatronics (bar springtrap who's an actual human).

Mangle appears in this game as Phantom Mangle.

Mangle's appearance is very similar from the second game as it is just a contested mangled mess of parts. Mangle also seems to be in a severely burnt state and Mangle seems to have wires all across its body here and there. Mangle has white, pin pricked, irises.

Mangle can be seen hanging from CAM 04 and, if the camera hasn't been changed, will arrive outside the office window emitting the same sounds from FNaF 2. It is louder than in the previous game and sounds similar to that of a damaged radio that can attract other animatronics to the player's location. This will only last for a while.

Mangle will also cause an audio error to occur and, on rare occasions, a ventilation error for the player and, surprisingly, Mangle has the same technique from the second game.

Player's death by Mangle in FNaF 2. 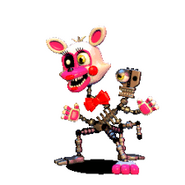 Mangle in FNaF World.
Add a photo to this gallery
Retrieved from "https://fnaf.fandom.com/wiki/Mangle?oldid=11927"
Community content is available under CC-BY-SA unless otherwise noted.